The DIY forum is for personal projects (things that are not for sale, not in production), info sharing, peer to peer assistance. No backdoor spamming (DIY posts that are actually advertisements for your business). No clones of in-production pedals. If you have concerns or questions, feel free to PM admin. Thanks so much!
Post a reply
multi_s

ya you may be able to find some domestically too (well not sure where youa re loacted actually) those are just some that came up on ebay in a 2 second search. but the cheap smps chip is 34063. many people make it could be MC34063 AP34063 i think there is 33063 etc too but ya. The circuit topology is different for inverter and step up or step down even so just make sure you buy a board that does what you want if it is pre made. but ya searching "34063 step up pcb" etc should find you many things.
BetterOffShred

I am anticipating this build taking me a while as I'm working on a few other things, so I ordered those from China. Stuff has been coming fast from China for me lately.. Knock on wood. And I haven't had a shipment get lost in like 7 months.. maybe I'm due..

I am going to build the circuit on a dollar store cutting board drilled to match my enclosure so I can wire it up in place since there's so many damn wires on this. I'm also adding the VCO in socket so I can sync it up with my sequencer trem and anything else down the road. I also want to paint the enclosure and get labels on it, which takes me forever. Not sure how to do the rotary selectors.. one uses 9 positions the other uses 8 .. I'd like a cool graphic for that..

I have all clear knobs for this too, it looks dope. Clear chicken heads for the rotary selectors. I think I'm going to paint it hot pink too..

Thanks again for looking. I'm going to post some progress pics tonight when I get home
multi_s

I lied. There's trick or treaters so I can't spend a bunch of time in the basement drilling. Damn
BetterOffShred

Well I've put some time into this tonight after I messed with my harmonic percolator. Which now is beginning to resemble this as it has like 4 toggles and 2 stomps in a BB box.

Anyway. I found a piece of plexi glass that's a little bigger than my box so I marked it to match and drilled it out. Then mounted my parts.. my board is also ready to solder Finished my little test box.. It's been handy to trouble shoot circuits.. the on/off switch actually bypasses the signal too so you can get an idea of where you're at as far as bypassed signal too.

Repurposed out of a little plastic box that was part of some manure we salvaged in my capstone project senior year of college. Muahaha I have been planning a broadcast clone for a while, and I finally built the board and drilled the box today for it. It's using a real vintage RCA 2N404 which I recall is about 115 hFe.. I may audition a few other things in various gain ranges just to make sure I'm not shorting myself. I also got a real TY-141P too.. sparing no expense! Haha, and I also bought a real 1054 chip so I can run it at 18V .. pumped

Those little voltage control boards came. I may mess around with them this week a little to see what I can get out of them. I think with that I really have everything I need to complete the PLL build.. I may just order the 12VAC adapter for 12$ off Amazon if I can't get satisfactory results since I have a two face clone build that runs off AC too.
BetterOffShred

Got my 12VAC wall wart, got the broadcast clone working and haven't decided on transistor yet.. a MP42 is winning the race so far.

Built a Schumann lion clone a month ago or so but it didn't work right, finally got it going today and it sounds so good .. the clean blend is unique for a 4049 OD, and I think it sounds great.

I have a Leo-X board I bought off Dino, so I can imagine that's going to be similar with 2 filters. I'm not sure if I want to mess with the expression control part of it ..

I drilled and painted the box for my Black Acid clone, multiple shades and then I block and sponge sand through it in various places to get kind of a strange worn look. It's ok.

I built a shoegazer clone .. Well I built a soda meiser a year ago, and then read it's just a soda into a Torns peaker.. so I built one of those and drilled and painted the enclosure. Just need my fine tip paint pens to arrive to finish it up.

What else.. I have my percolator/green ringer/boost all drilled and part of the way assembled, but the wiring is such a chore on that. Even worse than the Skyripper. I need to just do it.

All parts acquired for the Sagan delay, which I'll probably attempt after I finish the Schuman PLL. I've always wanted a triple delay.

I seem to be avoiding the PLL, but I really do have everything for it now so there's no excuses left. I'll probably populate the board and wiring tomorrow after work. I'm thinking to paint the box hot pink.

Little progress. It had 54 links .. that took forever.

Got the resistors and diodes in. I think if I leave the other two out I can try my 9VDC supply with the daughter boards. I think I'll try it and if it doesn't work I can just install those 2 diodes and the 337 and 317s. Well tried the daughter boards and they work great, but I don't have a reliable source of negative voltage without making another daughter board.. so I just decided to go with the AC power. My adapter puts out 13.8VAC no load, so I'll just use the 337 and 317. 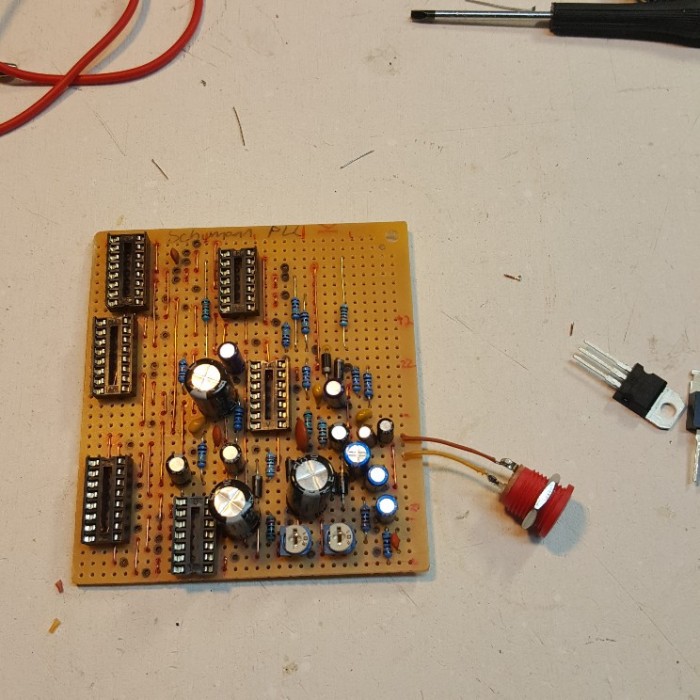 and then dialed in 12 v on both sides! So now it's just wiring. Not so bad
BetterOffShred

I stripped like 80 wires, roughly 12" long, and then started soldering them all on. It's a big spaghetti mess. 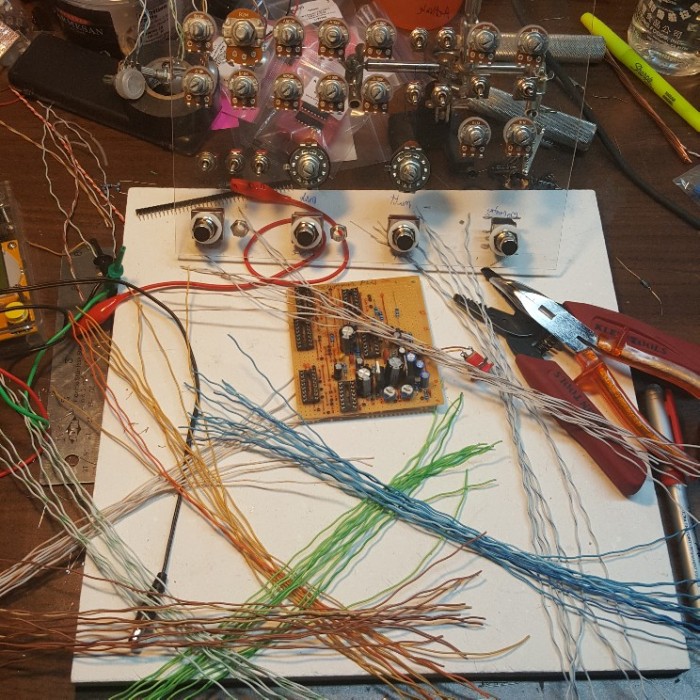 Are you keeping the plexy/lucite faceplate? Maybe sink some LEDs into the mess that will strobe along with various frequencies?
BetterOffShred

crochambeau wrote:Are you keeping the plexy/lucite faceplate? Maybe sink some LEDs into the mess that will strobe along with various frequencies?

Nah, it's just my wiring template so I don't have to wire it up in the box. It's a G size box, so it's 2" deep. I have a bunch of little pink zip ties so I'm going to try to keep the wiring fairly tidy.. but that's what I said about my Skyripper and it ended up not so neat ..

but hey, it works and it's neater than I used to do it

And yes, I'm a total sucker for lights that blink with speed or frequency etc.. the glitch light on my phantom arcade has been fun to stare at lately. I don't think I'm going to try to implement any of that in this box. I'd love a clear shaft pot from small bear with a clear knob that lit at certain frequencies.
Post a reply
Switch to full style